Article from the Lewiston-Auburn
Sun
Journal 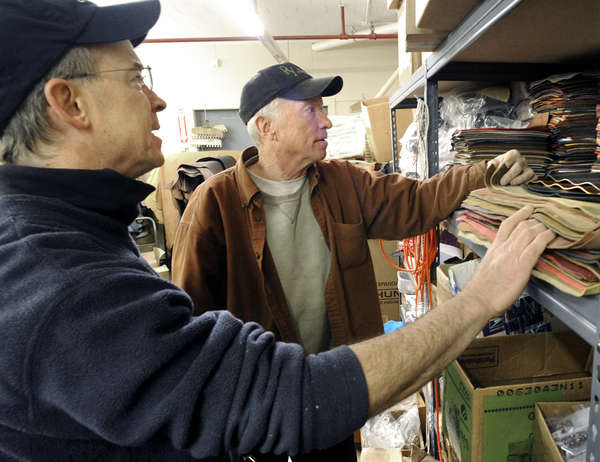 Churchill Barton, left,
goes through some pieces of leather with customer Tobey, who came from
Bristol, N.H.,

to visit the store that
is only open a few hours each week. The majority of business is done online.
Russ Dillgham photo

Local businesses say it’s
possible to buck the trend and do great in a down economy.

“Expect to find bullet holes,
arrow holes, scratches, cuts, and even tire tread marks, we kid you not.”

His online store, BrettunsVillage.com,
offers deer, elk, goat, sheep, cow and fish hides, all with a side of humor.
(“What is this type of leather good for? You tell us and then we’ll all
know.”)

Barton, who runs the company
from a Lewiston warehouse, seems to have hit on something of a secret formula:
Keep the customer entertained and keep the price right, and that will keep
products moving. He sells to Cub Scout den mothers, costumed pirates and
the Coast Guard.

Business is, in fact, growing.

Perhaps surprisingly, he
isn’t alone. All over Western Maine, companies say they’re having a great
year, even expanding, as gloomy headlines warn they should be doing anything
but.

“I was talking to my accountant
– I thought maybe I was a weird bird doing well in tough economic times,”
said Don Grant, vice president of Grant’s Bakery in Lewiston. “He says,
‘No, I’ve got two or three restaurants doing as well as you are.'”

Some have tweaked their
strategies.  Barton is marketing more aggressively.

Betsy Dorr is stocking a
wider price range on her Quilt Essential shelves in Auburn.

A few are benefiting from
others’ downturns: Heather Rideout suspects some of her file-shredding
business used to be done in-house at companies that have since cut jobs.
Now her File-Busters in Lisbon is looking for a bigger space.

Some had expansion plans
in the works before the economy started to sour last fall and decided to
go for it anyway.

“We never turned back. I
think the economy’s helping us without a doubt,” said Kristen Glazier,
who with husband, Jim, opened the Roaring Brook Farm & Garden Market
in Sabattus in mid-April, a roadside stop for local produce and grow-your-own
fans. It complements their Roaring Brook Nurseries.

There is a lot of “back
to the basics in this economy,” Glazier said. “We’re really gearing up
for gardeners.”

Barton credits his success
to old-school business advice. Listen to the customer. Pay attention to
(and try to outdo) the competition. Watch your money.

“When it started turning
bad last fall, then we started paying attention to how we spend our advertising
dollars,” he said. He also “dramatically increased” that budget.

The company sells dog supplies,
antique keys and restored trunks in addition to the odd stock of industrial
leather.

He said he’s close to adding
a sixth person to the payroll.

Jen McEntee, director of
customer care for Barclaycard U.S. in Wilton, anticipates hiring 20 throughout
2009, bringing staff up to 105. The contact center opened last May with
just 10 people.

Corporate spokesman Kevin
Sullivan said that sort of growth has been possible through business partnerships
and getting a larger slice of the millions of new credit cards issued each
year in the U.S.

Another call center in an
upswing: NotifyMD.

Its Winthrop branch will
open in early May creating 16 jobs. At the Farmington branch, employment
is up to 76 from 16 in 2007. Employees take mostly non-urgent daytime calls
for hospitals and doctors’ offices.

General Manager Sharon Cullenberg
said NotifyMD has shown it can save time and money – an enticing pitch.

Dorr, the owner of Quilt
Essentials in Auburn, said she’s grown with a mix of approaches, like a
recent Open House and new, less expensive stock. Clientele seem younger
lately. Knitting and quilting classes are filling up faster. It helps that
people can do both from home and make small purchases to keep a project
going, she said.

“I’ve heard lots more people
saying, ‘I want to make sure I’m supporting local business’ after seeing
others close,” said Dorr. “People seem to be more conscious of that.”

Several business owners credited
solid reputations – there’s hardly a better time when reputations come
in handy as when the economy is down.

“In this kind of a market,
people may not be thinking about building a new home, they might not be
thinking of moving up, but needs go on,” said Dan Allen, owner of Allen
& Co. in South Paris, a building and remodeling company. “Trees falling
on houses happen, fires happen, roofs still need to be reroofed. Changes
continue to be made.”

On his backlog: a repeat
customer who needs work on a barn and a surgeon, new to the area, who wants
a remodel and an addition and had several people recommend Allen.

All the same, he said: “Anybody
that’s prospering in an economy like this should say, ‘Wow.'”

Glazier said her business
hadn’t seen a serious capital upgrade in about 15 years. The new retail
shop on Route 126 features garden supplies, two greenhouses and will stock
local produce. She and her husband have big plans for their 150 acres:
a pumpkin playland, new fields of pick-your-own fruit, opening the farm
to school tours.

“It was just the right thing
for us to do at the right time. It’s a big undertaking,” she said.

The business will soon go
from four employees to eight.

Agren Appliance & Television
in Auburn debuted a new Sit & Sleep Showroom in February with 10 beds
and 20-plus recliners. Marketing Manager Paul Baribault said that second
floor had been warehouse space.

“We were well into the renovation
when things started to get bad,” he said. “This was looked upon as a means
of broadening our appeal to customers. It seems to be a good decision and
we don’t regret it.”

International Door Corp.
in Lewiston is putting the final touches on its $100,000 upgrade, a project
that added a showroom and conference space where there used to be parking
lot.

“You had the phone ringing,
contractors coming in and out, and you’d be trying to sell something big
using hand samples,” said President Paul Baril.

It’s been about a 60-40
split, he said, between customers upgrading an existing door and buying
one for new construction. Even now, new homes are going up.

“When we can bring people
in and show them, when they can touch and feel the product, we probably
close 90 percent of the sales,” Paul said.

“If you’re good at what
you do, good times, bad times, it’ll work out,” Paul said.